THE title of Imperial Star should really be imperial stars as if sharing the throne as the king and queen.

The third brightest star in the sky, lying two hours in Right Ascension east of the Cross is Alpha (α) Centauri. For some odd reason northern authors will often place Rigel Kent behind the first magnitude star Arcturus — and this is often slyly done by just individually listing the two stars. Either way, α Cen combined and α Cen “A” are brighter than Arcturus.

Alpha Centauri in the sky lies within a bright part of the Milky Way, so the telescopic field contains many background stars.

Based on these rough estimates, this can be seen graphically in Figure 1-1, showing separation versus time. 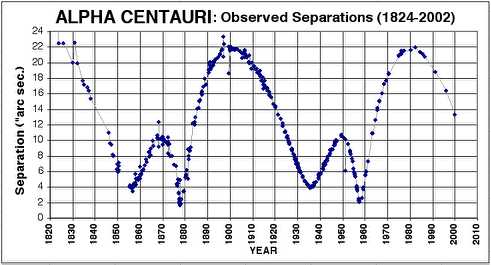 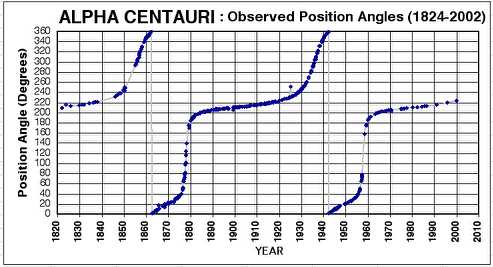 The older orbital elements were produced by W.D. Heintz and were used in the 3rd, 4th and 5th ‘Catalogues of Orbits of Visual Binary Stars’. These values are considered to be accurate between the years 1950 to 2000. In the US Naval Observatory (USNO) ‘Sixth Catalog of Orbits of Visual Binary Stars: Orbital Elements’, these are referenced as Hei1958, but the final element were actually published in Veroff. Sternw. Munchen., 5, 100 (1960). The next orbital elements with a higher precision were added to the 6th Orbit Catalogue. These appeared in the 2002 paper published in Astronomy and Astrophysics by collaboration, whose first name is listed as the Belgian observer D. Pourbaix. These observers were able to measure and reevaluated the blueshift between the two components then compared them to quality radial velocities.” This is abbreviated in the WDS Reference file as Pbx2000b. One of the main differences is the quality grade of the orbit, which has been downgraded to 2.

Differences Between Times of Perihelion and Aphelion
(1750-2150)

For any problems with this Website or Document please e-mail me.